I have no idea why this didn't post automatically on January 1 as it was supposed to.  My apologies for not double-checking.

Every year I do this, draw up a list of my dozen best.  Given the amount of wonderful theatre I get to see, some rules became necessary.  First, no two shows from the same theatre company.  Second, I limited myself to actual plays, rather than (for example) dance performances.  This year I faced a dreadful choice between two plays by the same writer who is a friend of mine!

The Flu Season (Pico Playhouse) was an exquisate poem of a play, about people who meet and feel and try to endure what they have or have not said, done. felt.  When you see as much theatre as I do, frankly any play that keeps you guessing as this does, while continuing to make sense, is a treasure.  That all this surprise surrounds so many fundamental human issues, tricky ones, the might have beens that haunt us, helps make this a very special show, brought to life by an ensemble that moved me in so very many ways.
Romeo and Juliet (Vagrancy)  Why does Juliet fall for Romeo.  In answering this question, the Vagrancy's production makes this centuries-old play extremely topical for our specific day and age.  For that reason I'm sure some audience members were offended.  But to me, the entire company created a world for the play which echoed our own in some terrible, tragic ways.  This ended up the best production of this play I've yet seen.

Native Son (Antaeus)  Another topical work, one which has sparked quite a bit of controversy amid my circle of friends.  Some lifted their eyebrows as this milky white dude reviewed a play based on this classic African American novel.  Others were upset at the liberties taken with the novel's story.  Some found the central character (understandably) repellent.  I certainly did.  But--and here is what puts this production on my list--as disgusting as I found that young man's actions, I grew to understand the why of them.  In seeing and knowing the shaping of his paranoia, his myopia, his desperation--and also realizing fundamentally he was far from the only person so shaped--I came to stunning realization.  Namely, that I am a monster.  In this society, even moreso in the era of the play, my white skin makes me a creature of whimsical and vast power.  It changed me by revealing a truth.  What more is Art for? 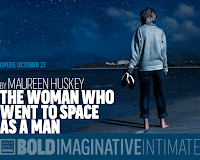 The Woman Who Went to Space as a Man (Son of Semele) may be the most original work on this list--a musical taking place inside the mind of a real science fiction author, a woman who pretended to write her works as a man.  What we saw on stage was an Odyssey with a female Odysseus confronting all the most important people of her life, up to and including many aspects and avatars of herself.  This theatre company, which put on the single best piece of theatre I have ever seen a few years ago, once again wowed and shook and moved me to center of my heart.

The Woman is Perfected was a one-woman show, the title coming from the last poem written by Sylvia Plath.  So.  A comedy!  Well, no--rather a searing portrait of a woman whose soul has become infected with and then totally converted to misogyny.  It was a horror story, in monologue, not told in terms of a story related but rather the monologue itself.

Play On! is another one woman show, this time a cabaret of songs written by and for the performer, each inspired by one of Shakespeare's great female characters from Olivia to Ophelia, Viola to Juliet and Gertured and Lady Macbeth and others.

Longing Pinocchio (ZJU) was an original retelling and re-imagination of the 19th century novel that somehow (much like Alice in Wonderland or The Wonderful Wizard of Oz) somehow succeeded in becoming a modern fairy tale.  Breathed into new life by looking at the source material with a fresh, often irreverent as well as sharply observant eye.

Winter Solstice (City Garage) is an example of why I give each theatre company only one slot on this list each year.  It otherwise proves too hard.  This play from Germany, superbly acted and directed as ever by City Garage, touches on an extremely topical question--that of the covert rise of fascism, via attractive lies and alluring half-truths all wrapped up in a generally friendly, supportive package.  But what does one do?  That question, powerfully asked by the play, is not answered here.  Rather, the answer is left where it belongs--with us, for us to come up with something, each individual.  Where else after all does the responsibility lie?

Gray People (Force of Nature) was written by a friend of mine, and this is one of two plays of his that opened this year.  I was very hard pressed to choose which one to put on the list.  It came down to which feels a tiny fraction of a shade more complete emotionally.  And it could have gone either way.  In the middle of the night, three people who prove both strangers and not-strangers to each other have met within some far-off woods.  Thriller, mystery, dark comedy, tragedy, and redemptive drama plus more, this play and cast enacted a soul-shaking tale of disturbing surprise to haunt audience members.

King Dick   is literally the funniest political farce I have ever seen, to the point where I sometimes cried and/or had trouble breathing.  At one point in history (this part is true) Elvis Presley requested a meeting with President Richard Nixon. From this emerges a comedy of error, mismanagement, paranoia, fantasy, drugs, and talking to the dead.  The cast superbly managed the absurdity of the situation so perfectly my brain is still reeling from it.

Blue Surge (Sixty-Six Theatre Company) tells a seemingly simple story about some flawed but generally likable folks in an ordinary small city.  It might almost count as a soap opera.  But we sense from almost the first line this will dive deeper into the human condition, fathoms deeper.  With a wonderful cast that is how deep it proceeds to go, down to some of the saddest facts of being human and alive--yet also how we can endure, how we can heal, how we can find a reason to breathe at all.

Love's Labour's Lost (Chase What Flies) proves a brilliantly delightful and "on target" production of what may be Shakespeare's lightest comedy.  Honestly, this script makes As You Like It look like Romeo and Juliet!  But--and this oft ends up forgotten in heavier fare--it has some genuine emotional truths, some sharp insights, and a melancholy or bittersweet undertaste that makes the humor so much more poignant.  That is portrays women as more mature than men, yet does not condemn either one, marks just one more detail this production hit in the bullseye!