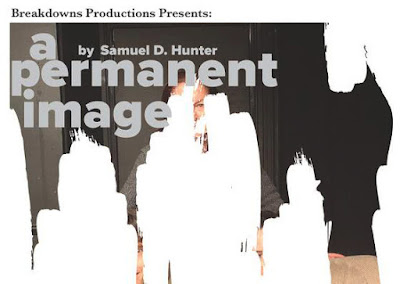 The new Breakdown Productions decided to perform Samuel D. Hunter's play A Permanent Image as their premier production.  Easy enough to see why.  One set.  Three characters on stage, one projected onto the wall.  Modern dress.

All well and good but what really struck me was the raw power of the piece.  Like a haiku, it packed a multi-faceted emotional and philosophical punch.

In essence we begin with a video recording of the man we soon come to know as Martin (Robert Clenenin).  He's trying to say something, something he evidently finds important but uncomfortable.  Off screen we hear the voice of his wife, who comes across as a bit of a nag.

When the lights come up, the next person we see is Bo (Andrew Loviska) , luggage in hand and eyes wide at seeing how everything in the room has been painted white.  Even the pillows.  Even the magazine on the table.  His mother Carol (Clara York) soon enters and explains away the painting as something she wanted to do.  A series of facts emerge.  Martin is dead.  He was Bo's father and Carol's husband.  It is Christmas Eve and tomorrow will be Martin's funeral.  Mother and son--who is an international photo-journalist--do not really get along.  Eventually we learn this is Northern Idaho and pretty soon we meet Ally (Sasha Venn), Bo's sister, who lives a few hours away.  She runs a business, has a lesbian partner and a little boy together who haven't visited this house in years.  They are not there today.

Pretty bare, those facts.  Even stark.  Of course more emerges, much of it increasingly startling.  Amid the tensions and arguments that follow, we the audience try and assign blame.  More, we try to assign simple explanations to the relationships here.  But as Bo and Ally soon find out, that will require a whole lot of looking the other way.  Which becomes increasingly difficult.  In fact, maybe the only way to do that is to run away.

Which they both already did.  With, to be fair, plenty of good reason.  Martin and Carol, we learn, were not particularly good parents.  Not horrible in terms of physical abuse or neglect.  But distant.  Difficult.  Obnoxious and demanding at times.  Even shrill, when there.  One can easily imagine the two overwhelmed kids trying to find themselves amid the neuroses locked in that house.

But after a time, one sees them as no less neurotic.

More, we begin to see the unplumbed and disturbing depths neither sibling saw in their parents.  "Who knew he had an inner life" Bo says of his father, which sounds funny and then really sad.  Because we all have inner lives.  We all have to find our own answers.  Not about career so much, or where to live, or even how one figures out how to make things right.  What we learn about Martin and about Carol is that sans their identity as parents, they began reading up on things like string theory and quantum mechanics.  While this shocks Bo and Ally, even more shocking is that clearly their parents understood what they were reading.

Disturbingly, they came to a conclusion based on it.  On it, and on the lives they'd led, how little control, even importance they've felt.

The warning atop this review to the contrary, I don't wish to spoil the play, not least because the journey for characters and audience seem to require experiencing rather than description.  Family dramas of this kind tend to create expectations.  One might think of diagnosis, meticulously working out the mistakes and situation, much like Chekhov and Tennessee Williams for example.

This play seems far more akin to Edward Albee, his existential exploration of human questions.  Who are we in this cosmos?  What decisions and reactions emerge from the mysterious alchemy which makes up our lives?  How much can one person's answers be of any aid to anyone else?  And amid all this, one of the very last lines in the play resonates in to my soul and out to the stars.  "I wish we knew each other better."  Even thinking of it now, brings a tear to my eye and for a legion of reasons.  Which stands as a fine testimony to the author, the genuinely talented (and courageous) cast, as well as director Genah Redding.

A Permanent Image plays Fridays at 8pm, Saturdays and Sundays at 6pm until January 20, 2019 at the Skiptown Playhouse, 665 North Heliotrope Drive (at Melrose),  Los Angeles CA 90004.