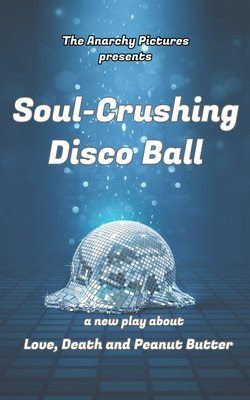 Honestly, when the guy telling us to turn off our cell phones and how to exit in the unlikely event of a fire also took a moment to remind us this was a comedy, I felt dread.  Experience says anytime someone makes a point of telling you something is funny--that makes for an omen of humorlessness.

On the other hand, maybe he was using reverse psychology on us.  I actually enjoyed Soul-Crushing Disco Ball quite a bit.  I even laughed.  Out loud.  Several times.  So did the rest of the audience.

Has a few problems, though.  None unsurmountable.

Fundamentally the play follows the lives of these two guys who become best friends when both were immature idiots in grade school (is okay--children are supposed to be immature idiots, and when they are not they become icons of certain genres of horror films).  By play's end, they have both grown up.  A lot.  Both have gone through quite a roller coaster (or roller coasters) of life and death, love and loss, success and failure.  In the end, they become much more rounded human beings in ways we all probably hope to grow up.

Sounds pretty good, right?  Now let us throw in the fact both actors have quite a bit of personal charisma and acting talent and the ingredients all sound right.  But a few problems do pop up.  One I just mentioned.  Both actors.  As in two and only two.  The play has numerous scenes, jumping "o're time" in a way that makes perfect sense for the story--going from childhood to teenage years, early adulthood, marriages, etc.  But this requires in effect the entire cast to leave the stage ever few minutes and do a costume change.  Literally, the play stops.  I've seen this kind of thing gotten around before, but it always proves tricky.  In this case, playing music loudly (music that almost never resonated with me in terms of the story, but your mileage may vary) and having an attractive pair of young women rush on to change the set slightly did not fill these moments.  So in effect the play stopped then had to start again.  Which set up an emotional drag, one I could feel.

So we have a problem the production evidently hasn't found a way to overcome, not yet.  Frankly, the story also zips by too fast.  I kept beginning to like and get genuinely interested in these guys, then things changed so fast.  For one thing, the sheer number of off-stage characters left me lost after a time.  I'm usually pretty good at this, but what with parents and several different fellow students, cousins and doctors, a succession of girlfriends and friends and wives then at least one child and in the end references to some children from the very first scene--I was lost.  I feel strongly that last scene was supposed to wrap up a mystery which was intended as a hint to a lot of behavior later on.  But for the life of me I couldn't remember enough details to put it all together.

Again, far from insurmountable.  The story, one that feels real and affirming, is there.  But obscured.

I want to recommend the playwright and production take this play back to some workshop process.  As it stands now, what's feels like some misfires short circuits the whole process of telling this story.  There was humor, but the balance felt off.   They need to find a way to fix the dead space between scenes.  Simplify yet expand it enough to feel more complete, less confusing.  And I'll add I'm not quite sure what the title is supposed to mean.  Maybe I got it.  But I"m not sure.