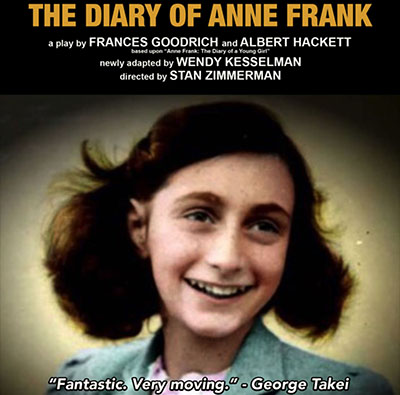 I remember reading The Diary of Anne Frank (the book, not the play) in my early teens and crying.  Decades later I heard a new, unedited version of the book had been released--one with slightly more disturbing, more complex content (we are talking about the innermost thoughts of a pre-teen then early teen after all, under far more than usual stress).  The play being done now in Hollywood is based on this new (or if you prefer, original) version.  Written by Wendy Kesselman, based on the original play by Frances Goodrich and Albert Hackett.

For those who (and frankly I find this upsetting) are not at all familiar, here is a breakdown.

The Diary of Anne Frank is all that remains of a life of a teenage girl who happened to be Jewish in Europe during the Second World War.  Her father Otto (Emiliano Torres), seeing the rising tide of anti-semitic discrimination in Germany, fled with his family to Holland in the 1930s.  Sadly in 1940 Germany conquered Holland.  Soon, Jews all had to wear a yellow Star of David on their clothes at all times.  They were forbidden from attending public schools, using public transportation, going to the movies.  All this proved a prelude to ordering healthy young Jews to work camps, from which they would eventually be transported east to God Knows What Fate.

Of course today we do know.  What awaited them was a systemic attempt to murder the entire Jewish population of Europe (plus Slavs, Romany, Jehovah's Witnesses, Communists, homosexuals and various dissidents as well as those with various health problems).  It came very close to success, with victims numbering in their millions.  That today we have people insisting it was all a hoax despite tons of physical evidence serves as a horrifying reminder this has been neither the first nor the last attempt at genocide, albeit the most infamous.

Only Otto Frank survived of his family, despite his best efforts--which finally came down to hiding in a hidden annex within the factory owned and run by a former business partner.  Anne (Genesis Ochoa) with her sister Margot (Nikki Mejia), their mother Mrs. Frank (Tasha Dixon) were joined by a family of three--Mr. Van Daan (Robert C. Raicch), his wife (Raquenel) and their son Peter (David Gurrola) who was a few years older than Anne.  Later a dentist named Mr. Dussell (Aris Alvarado) joined them.  With almost no privacy, needing to remain utterly silent during the day, full of terrifying dreams of what might be happening to their friends, everyone sooner or later on each other's nerves--yet through it all this remarkable young girl kept her diary, which was discovered after the war and became this shining voice echoing out of a very very dark shadow of history.

Which to be fair could have ended up maudlin beyond words.

Instead it comes across as deeply real.  I'm not going to pretend the current production is flawless, but the people on stage do come across as real rather than stereotypes.  Perhaps to emphasize this even more, the director took a startling but powerful chance:  Having read that some refugees are hiding from ICE in safe houses here in Los Angeles, director Stan Zimmerman decided to use that as the frame for the whole show.  In a place not unlike the Annex of the book, Latin American refugees gather with copies of the script and begin reading the play aloud.  Soon, in a not very clear transition, they go from reading the play to becoming the characters in the story.

Which some may find disorienting but works to hammer home a central truth that needs repeating--we are all human beings.  Differences of accent, cruisine, language, etc. are fundamentally trivial at worst--delightful and exhilirating at best!  And reminds us, the worst of human nature is still with us.

Now--since I know some are going to take offense at equating the United States with Nazi Germany much less ICE as the Gestapo, let me state my perspective on this.  To deliberately slaughter millions  was by any definition an atrocity.  But is letting two children die of thirst really any less of one?  How many children can we let die of thirst before it becomes something that horrible?

We as a nation, as a species, and as individuals need to remember that.  And good theatre, like all good art, exists to help remind us of that.