The Definition of Man (review) 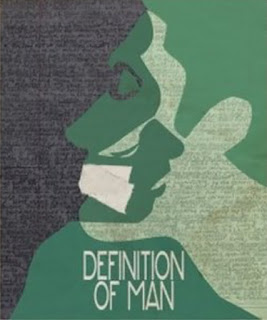 A few years ago I was invited at the most moment to see this very show at the Hollywood Fringe Festival.  Since then it has traveled abroad, to Berlin as well as the Edinburgh Fringe Festival.  Now it has returned to Los Angeles for a limited run.

The Definition of Man marks a type of performance I call "Theatre of Dreams" because it simply makes more sense to so many audience members to think of it as a dream.  In this case a man and woman, the sole survivors (evidently) of a world-wasting apocalypse, seek to fill their time.  What can they do, ultimately, save contemplate themselves and each other?  Truths uncovered prove uncomfortable, sometimes tragic, sometimes funny, but in the end something wonderful happens--or is achieved.  Certainly purchased with a process of self-awareness that hurts as much as it frees.

We never learn their names, but we learn a fair amount about their backgrounds.  XX (Jason Rosario) and XY (Nikki Muller who is also the playwright) are both Americans from broken homes.  Both carry with them the habits of dealing with the traumas of youth.  For him, a lack of identity or sense of home, an eternal other-ness as he existed between the Anglo and Puerto Rican worlds.  She likewise sought to somehow reconcile the deep, abiding love she felt from a father whose calculated cruelty aimed at her mother never ever stopped. 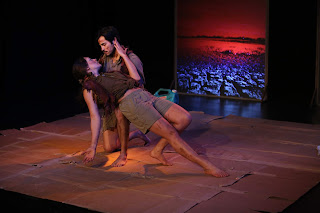 But the apocalypse of which they are the sole survivors?  Nothing.  Nor does it matter.

Instead we get an image of dirt and dust, an arid seemingly flat wasteland sans any real features and with water too precious to do anything save horde to quench thirst as an absolute last resort.

Simply, they have nothing.  Except each other.

During the course of an hour, in dance and drama, movement and aching words, not only do they wallow in their own issues, but slowly (sometimes quickly) whittle away at what underlies them, to their most primal shapes.  It gets ugly.  It also becomes beautiful, as they learn so much about each others' pain.  Once all things are exposed, all wounds revealed, every dark or neurotic impulse with their consequences now stand naked--then real communication happens.

The heart and soul of each reveals itself at the end, allowing words to fall away, permitting forgiveness, making possible something fundamental.

A harrowing Odyssey not to conquer fanciful monsters, but the aspects of one's self when in the end there is nothing else to explore.  No more words,  No more scenes.  In the end, movement and action and therein a hopeful truth amid nothingness.