The Last Croissant (Catch up Review) 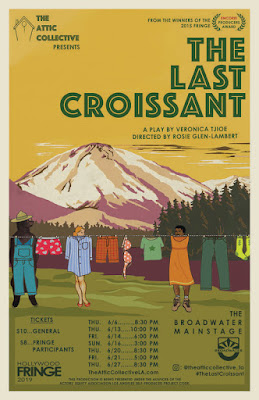 Having heard a kind of general positive buzz about the show and since it fit so neatly into my schedule, I got in line for The Last Croissant.  While waiting, the cast came out and gave us a musical pre-show which led me to half-expect a musical.

Nope.  Not a musical.  Rather one of the most delightful plays of this year's Fringe.  Absolutely in my top ten (and that is saying something, given the quality of this year).

The show takes place in a camping site in some national park in California.  Ultimately three tents serving as temporary homes to three sets of people rise in this spot.  A microcosm in some sense of...something.  I'm not that sure.  It doesn't matter.  The genre is pure urban fantasy, despite the lack of anything urban.  Also the lack of any unifying gimmick like a school for magic students, a private eye who turns out to be a werewolf, a friendly family of vampires, a pile of old photographs revealing a deadly war fought just outside our vision, etc.

Instead we get a world where we stumble across what must be called magic.  Like a talking bear.  And other things.  Like paper cranes falling out of the sky.  Nobody understands it.  Most don't try.  Explanations are not forthcoming.

Instead we get the gentle humor of human oddity, brought forth in dozens of interesting ways (such as the man and woman playing two bisexual men who are clearly a romantic couple--but may not themselves be aware of that fact).  We find two people with strange jobs clicking in some fundamental way.  And an elderly married couple (again played by a man and woman, but each playing the other gender) adjusting to retirement as well time with each other, alone.  Lots of gentle, sometimes cutting, yet generally kind and humorous examples of human folly in this play.  Also lots of love, one way or another.  Not a parable really, just a story.  A story of people who go into the words and are changed by it.  I smile.  I laughed.  I shed a tear or two while wanting to hit a couple of characters upside the head.

And in the end, I emerged from the woods a little changed myself.

The Last Croissant has one more performance of the current run (I so hope The Attic Collective mounts it once more), on Sunday June 7, 2019 at 8pm at the Broadwater Mainstage, 1076 Lillian Way (at Santa Monica Blvd, roughly one block west of Vine).
Posted by Zahir Blue at 6:48 PM