The Bully Problem (Catch up Review) 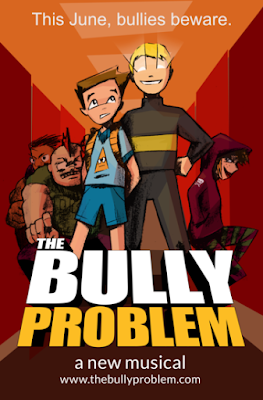 Anyone who does not feel a twinge of sympathy just with the title of this show--I don't understand you.  At least, hopefully I do not.  Bullies and bullying cause so much misery, so much long term damage to children...yet solving the problem seems to involve no easy solution.

The Bully Problem is a musical aimed at children.  Refreshingly it speaks to children but does not do so by speaking down.  It lacks condescension.  Because of this, it also speaks directly to the child still inside each of us.  Especially those who didn't fit in, who were different in some way, who somehow had "target" glowing over their heads which certain other children could see--to their sadistic glee.

The plot?  Pure fantasy!  A brilliant kid in Junior High who longs to go to special high school for gifted children is (naturally enough, sadly enough) the natural prey of a gang of bullies.  In the show, most of the bullies are easy to spot--they move with a swaying gait like predators, heads down, mouths curled up in cruel contempt.  Perfect for the heightened reality of a musical.

But this kid's late father sent him a special gift, a humanoid robot of all things with a defense mode making it/him a natural bane to any threat to anything which might threaten the boy.  Yet he is also programmed to help him in other ways.  That is how he finally connects with the other bullied kids at school, and helps them by putting them under the robot's protection as well.

Now, make no mistake--the musical is fun.  The songs are good and production clever as well as entertaining.  Kudos to everyone in the cast as well as the designers of everything from sets to costumes to sound.

But here is my favorite bit.  Its message, given in action rather than words.  Hope for the bullied children of this world.  You are not alone.  Time is on your side.  You can endure and even win.  And reaching out to others like yourself helps so very very much.  That in the end, the bullies are not even portrayed as sociopaths or demons but rather fools who need to grow up--I liked that very much.  Honestly, I wish I had seen this musical when I was the age of its cast of characters.  It would have helped.  A lot.

The Bully Problem has been extended and will have two more performances in it current run, on Friday August 9 at 8pm and Sunday August 11, 2019 at 9pm at the Hobgoblin Playhouse, 1625 N Las Palmas Ave.
Posted by Zahir Blue at 5:44 PM