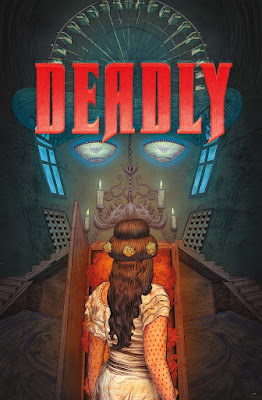 Something about serial killers.  Like demons or dark lords or James Bond villains, they fill the role of charismatic antagonist in a way both over-the-top yet grounded in reality.  They make for excellent sources of theatre, from Sweeney Todd to The Vagrancy's Normal (about Peter Kurten) as well as lots of plays of Jack the Ripper, Jeffrey Dahmer, etc. Now Sacred Fools offers a musical based on H.H.Holmes (also the subject matter of the best-selling Devil and the White City).

Deadly, however, takes a whole new--and entirely welcome, even thrilling--take on the whole idea.  Writer Vanessa Claire Stewart chose not to focus on the admittedly fascinating Holmes (who does follow the pattern of such being dysfunctional in the extreme) but rather on a handful of his victims.  The all-too-often forgotten ones, in part because there are so many, plus being so ordinary (in other words like you and me), and then there's the worst part.  They were women.  No a particularly prized commodity in our society at its worst.

Holmes (Keith Allan) was a doctor/pharmacist/mostly con man who owned and ran a building in a town outside Chicago during the 1892 World's Fair.  This building, in theory a hotel, earned a different title before burning to the ground in the wake of his arrest.  Murder Castle.  Full of traps and implements of murder, it included a chute taking bodies to the cellar.  He sounds rather like a figure in some horror movie, probably torture porn.  Most histories of the man and his crimes tend to assume he had sex with most of his victims.  In this, they are taking the murderer's word.  This show assumes he was lying a fair amount of the time.

Central to the entire piece breathes and sings (it is a musical recall) an amazing metaphor on many, many levels.  Holmes' Castle remains haunted by those he has slaughtered, at least some of them.  They turn out to be our protagonists.  Emiline Cigrand (CJ Merriman) was a nurse, helping those suffering from alcoholism, then looking to move up in the world.  Her favorite patient, a weak man under Holmes' control named Benjamin Pitezel (David LM McIntyre) developed a crush on her.  She did not reciprocate--an excuse for Holmes to kill her.  Just as Pitezal's temporary replacement Evelyn Stewart (Kristyn Evelyn) proved immune to Holmes' charms so he gassed her to death in her room.

Not that it mattered.  Julia Connor (Erica Hanrahan-Ball), bored by her husband, did willingly go into his arms, believing his words of love.  He stabbed her to death, then pressued Pitezel to poison her daughter Pearl (Ashley Diane).  None of these are the first or last.  Indeed the chronological first victim of those we meet, Lizzie Sommers (Britney S. Wheeler) begins the show as a shade, sadly welcoming others as they cross the veil.

As their numbers grow, so too their rage and indignation.  Hopes and ambitions destroyed.  For what?  Lives snuffed out.  Why?  Human beings reduced to rotting flesh and broken bone, half-remembered names on ledgers here and there.  Spirits gather and seek to make their voices heard.  Eventually, they begin to succeed.  Pitezal begins to hear them, vaguely.  So does Holmes, although he fiercely insists otherwise.  Pinkerton Detective Frank Geyer (Eric Curtis Johnson) never manages to, although he at least tries to find some of them--and in the end does discover the remnants.

Perhaps most poignant of all is how these ladies grow as people, in the company of each other and in the wake of what they've experienced.  Julia's sad lament on the Other Side, asking forgiveness of Pearl for not being a better mother almost broke my heart.  Anna Williams (Rebecca Larsen) and her sister Minnie (Samantha Barrios) weirdly, funnily, sweetly reconcile.

But the refrain of their names, their demand to be found, to be remembered--this becomes a thread to unite the story especially in Ryan Thomas Johnson's tunes titled "Find Me Now" "Light a Fire"  "Herman Can You Hear Me?"

Clearly, Holmes (that wasn't his real name, btw) was caught in the end.  A true psychopath he never stopped playing his games, even when admitting guilt.  One of many strengths in this show is how some hints of the child he once was do emerge, yet excuse nothing.  Casual, calculated cruelty remain his hallmark--and we never ever forget it.  He never becomes a protagonist.  Never earns a drop of forgiveness, as perhaps he might have.  Pitezal does, in large part because of his eventual horror at his own actions.  Not so Holmes.

In fact, that brings up perhaps the best thing about the musical as a whole.  Director Jaime Robledo and Choreographer Brin Hamblin pull off a wonderful moment as, at long last, Holmes leaves life and meets his victims again.  He of course does not acknowledge them by name.  Nor apologize.  He gloats they'll never get rid of him now.

But--he is wrong.  Very wrong.  As they simply and profoundly demonstrate.  In a theatrical performance that cover quite a lot of ground, those final moments pleased me the most.  The simple but hard-earned victory of what should be over what should never exist.