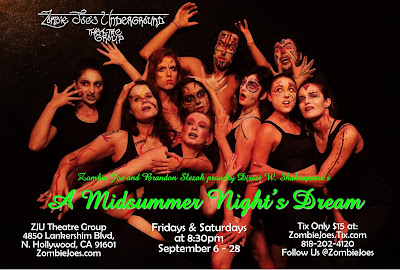 There's a reason Shakespeare remains popular (actually, several) and likewise why so many theatre companies like to mount the sprawling comedy A Midsummer Night's Dream.  ZJU's current production is the second such I've seen there, and probably the tenth individual production I've seen ever.  Given its ambiance (consider the title alone) this play lets the cast just let loose in an energy-packed dance of confused identities as well as delicious, weird contrivances.

Still, it can be dull.  One needs a good director and a good cast to pull it off.  In this case co-directors Zombie Joe and Brandon Slezak put together a very talented troupe then went with a delightful set up.

Trimmed to the bone, our story deals with three groups.  First are the Lovers:  Hermia (Samantha Gordon) loves Lysander (Coralie Bastiaens), but is loved by Demetrius (Mackenzie Martinez) who in turn is beloved by Hermia's friend Helena (Eileen Chase).  Next are the Players--a group of "Rude Mechanicals" getting ready to put on a (very) amateur performance in celebration of the Duke's wedding.  Leaders of this troupe are Quince (Steve Alloway) who organized the show and his lead Bottom (Laura Fodera), plus various others including Flute (Mike Targus) as the female lead.  Finally there are the Fairies, whose King Oberon (Victoria Saitz) is at odds with Queen Titania (Rebeca Del Sesto) and plots to win a changeling child via a devious scheme with the mischeivous Puck (Rosalie Aslpach).

For plot purposes we need not explain now, all three groups end up in the woods outside Athens on the same night.  Hence hijinks of various kinds take place, involving love potions and magical transformations, mistaken identities, mismatched lovers, chases, all culminating in a wonderfully bad performance by the Rude Mechanicals at a grand wedding.  If you know the play, you may or may not remember how all that happens but it doesn't matter if you don't.  The plot, while complex, is thin as a fairy's wing.

This specific production feels more than anything like some version of a 1960s hippie rave, complete with one character played by a puppet (!) and the entire cast sooner or later becoming trees, fairies, even hills.  Honestly, a few more bell bottoms and beads, and one would expect maybe a Jim Morrison song.

Or no.  Honestly it feels more like the Mammas and the Pappas, with few dashes of Pippin thrown in for seasoning.

Most of all, the whole thing flows together as this organic and quite fun-filled whole, with an emphasis more than anything else on the feel of events--one where everything matters and nothing, where love is delightful but baffling, where humor and good cheer prove an excellent way to meet life's challenges.  Meanwhile, never forget foolishness remains our birthright as mortals.  With a sense of wonder the play comes to its end, and we leave the world of magic behind.

Until we next enter a theatre to see a show.