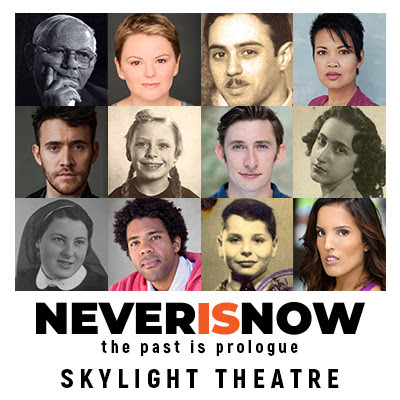 The subject matter of Never Is Now by Wendy Kout can almost not not work.  Recounting in chronological order the lives of young people who survived the Holocaust nearly seven decades ago needs only basic competence to strike the heart.  Such remains the nature of that atrocity--or, more accurately, that cascade of atrocities.  Who cannot find themselves moved?

So in a way, the subject matter makes things easier.  As does the format, reader's theatre, in which there's little overall story but an almost documentary-style presentation of events.

Make no mistake--it works.  It works due to a simple fact--these real lives harrow us, just by the sharing.  Such truths lash out, making audiences wince and often weep.  I certainly did.  Which remains the whole point.  If we let ourselves feel, then the experience of such memories shared changes us.

The readers' theatre format is an almost too-easy way to approach the subject matter--which, to be sure, I've experienced dramatically with much greater power and pathos many times--but seems almost perfect for its avowed audience.  Never Is Now existed first as something to perform at schools, exposing very young people to this slice of genuine horror out of history.  It need not be superlative, only good.  Which it succeeds at, very well.  In fact, technically the production co-directed by Tony Abatemarco and Celia Mandela Rivera proves almost a "how to" for shows with many, many sets and constantly changing locations and times.  Someone like myself who sees theatre a lot can savor the raw, seemingly effortless (not it isn't but it looks that way) flow of story amid the constant change which in so many productions stops the action dead in its tracks.

So the basics are good.  Given the subject matter, good means heart-piercing.

It goes one better--by creating a sense of the players themselves reacting to the material.  One of the most powerful saw Sarah Tubert realization that she, as someone deaf, would have been targeted and early on.  She captures the helpless rage of looking back a vicious injustice, one that would have included her, the retroactive fear and longing to change things, which of course cannot be.  That story is written.  It cannot be undone.  All we can do is learn from it.

Likewise this "framing" delves into current events, with Eliza Blair for example noting how she has now become weary and afraid in the face of rampant, resurgent hatred.  Like so many in the Reich, she feels a desire to wait out the troubles, hoping to survive.  A bit more complex is Michael Kaczkowski as the only cast member who admits to voting for Trump, spewing sincere concerns that sound so utterly shallow--and Adam Foster Ballard calls him on it with his own story as one of those already targeted under Trump.  But to be honest, this framing doesn't always work. Maybe it cannot, given how little time we are given to know the players (or the versions of the players the piece calls for).

Still, it remains good.  It does more than tug at the heart strings, actually beating on one's heart like a drum.  Playing "Taps" most likely, for the dead and the vanished in their still-uncounted numbers (no one can ever know the exact death toll, still less the measure of pain involved).

The show ends with a simple coda, the faces of  real survivors whose stories have been told.  Faux writer Evie Abat and director Joey Millin spring this "change" on the cast, just as they feel exhausted not only from the play but their explored reactions to it.  So it ends on a note of melancholy hope.  Which again, is good.  It moves us, as it should.  As it must.  As it will--and if it does not frankly that seems like a problem if it does not.