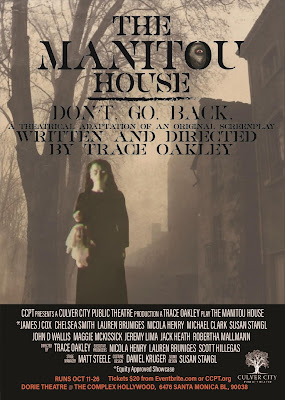 Just in time for Halloween, The Manitou House comes out from the Culver City Public Theatre.  Written and directed by Trace Oakley, essentially the show is an homage to a certain type of made for t.v. horror/thriller movie churned out in the 1970s.  Since these were indeed my own teen years, I totally 'got' what he intended to both spoof, honor, and emulate.

Let me be very clear.  As an idea this seems fine.  During the performance, plenty of times spooky events genuinely felt spooky.  One of my favorite types of "horror" might better be called "meeting the uncanny" and this play fits that bill!

Novelist Martin Hale (James J. Cox) returns to the small Colorado town where he grew looking for inspiration.  A little eerily just to start, the town's name turns out to be Manitou Hills.  But the eerie details start to mount, as the house where Martin grew up turns out to have been vacated days previously, available for rent at a ridiculously low price.

And the eerie mounts.  His cell phone won't work in the house.  The landline sometimes works, sometimes does not.  People come to see the former owners, baffled as to why they'd leave.  For that matter there's the townsfolk, who seem just plain odd.  Plus someone he used to know way back when gives him the strangest looks when Martin mentions where he is now living.

Then he finds out the realtor who rented him the house died years ago. 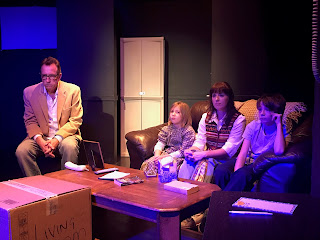 Now doesn't this sound cool?  Nicely creepy?  A good Halloween show?  Well, it is.  Sometimes,  Sometimes it is not.  Frankly I think the author didn't have enough time to transfer his idea with complete success to the live stage instead of film (it began as a screenplay).  Many scenes are much too short, and don't really contribute smoothly to the overall feel and rhythm.  Yet sometimes they hit it out of the park.  Cannot say how much I liked the scenes when Martin sat down to watch one of his favorite movies as a kid, while we see Young Martin (Jack Heath) and his equally young sister Simone (Maggie McKissick) watching the same movie with their easily terrified babysitter Luch Rish (Lauren Bruniges).  In fact, these scenes prove vital to figuring out What Is Going On Here.

I could easily name half a dozen things wrong with this show, including a set that doesn't quite work for all it is supposed to do, and a denoument I don't quite understand.  Yet there remains something here that works, something that makes me hope the show gets good audiences and eventually a second production after some re-writes.  It also makes for a refreshing change from classic ghost stories in weird old mansions, usually in New (or olde) England.  The cast deserves praise as well--Nicola Henry, Jeremy Lima, Michael Clark, Robertha Mallmann, Chelsea Smith, Stusan Stangl, John David Wallis, with voices by Grace O'Neill, Sharon Grambo, Bom Grochau, Brian DeGracia, Margery Whalen, and Dave Parks.  A cast this size usually includes some duds, but not this one.  More, while I myself was not as thrilled as I'd hoped, the rest of the audience seemed to have a great time (instead of my own just "good" time).

The Manitou House runs Fridays and Saturdays at 8pm, through October 26, 2019 at the Dorie Theatre in the Complex, 6476 Santa Monica Blvd, Hollywood CA 90038.