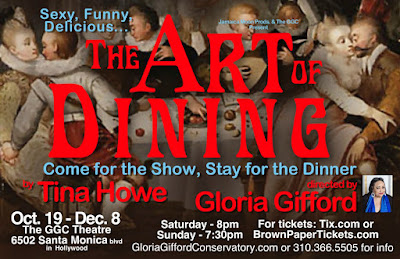 Tina Howe's The Art of Dining (directed by Glora Gifford) makes for an eccentric little slice of life, located in a private home transformed into a tiny but very high end restaurant by a young couple.  This couple and the guests at their three tables showing up in the midst of a heavy snowstorm make up the cast of characters.

I am honestly somewhat at a loss to write this review because there is a rotating cast of actors involved.  Not two sets of same, as the Anteus Company routinely does, but a true shuffling of the cast for each single performance.  So, there exists no way to predict which cast you the potential audience member will see.  This impacts things profoundly, not least because the other cast members acted as ushers and they have quite vivid personalities of their own, which no doubt impact performances.

So, what am I reviewing?

Well, the overall script and the general direction seems most obvious.  Howe's play has a very specific feel and flavor (if you will).  Does this production achieve that?  I don't think so, but its general direction of borderline sitcom/almost slapstick comedy still works!  It remains funny!  So this achieves and retains that precious commodity in any comedy or show in general--it entertains.  A lot of talent, energy, even fearlessness and skill reveals itself on that stage (at least in the show I saw).  Getting into much detail seems pointless, since I cannot guarantee or even reasonably suggest you will see the same performers I did.  But the consistency of the skill, the energy, the timing, etc. bodes very well.  That kind of consistency rarely proves an accident.

My ultimate reaction to the show ended up twofold:  I did enjoy myself (and the nice snacks during intermission as well as after the show were a pleasing bonus), and I also found myself curious as to other shows done by the Gloria Gifford Conservatory.