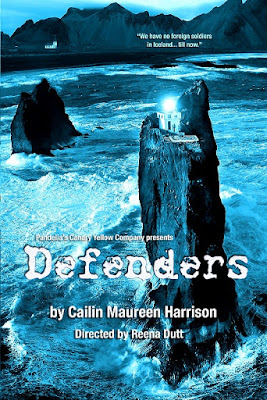 On an island off the coast in Iceland during World War II, a trio of US soldiers barely make it to shore.  Fearing a German invading force after several U-boats were spotted, the Allies want to defend this place from being used as a base for attacking convoys.  The storm forces them to take shelter in an old abandoned church, with a broken radio and equally broken artillery piece.

So begins Defenders by Cailin Maureen Harrison directed by Reena Dutt.  It focuses on these three serviceman, all alone in a strange place, in contact with none save a local minister and his young daughter.  The storm never seems to end.  The island itself remains extremely dangerous for totally natural reasons.  As far as they are concerned, this has become a near suicide mission with little hope three individuals might stand against an invasion of Nazi troops.  Worse, something maybe not-so-natural is going on.

If this sound a bit like an episode of The Twilight Zone, you have figured out what kind of feel this show conveys. And a pretty masterful example of such, as three soldiers of very different backgrounds try to cope with conflicting ideas of what the world really is.

Lieutenant Jansen (Bryan Parter) proves a very junior officer to handle what seems like a huge responsibility.  Almost immediately, though, a problem emerges.  Subtle, but profound.  He feels the need to show his Sargeant (Tavis Daucette) who's boss.  Noncoms are the glue that hold military units together, among other things supporting their officers--which we see this Sargeant do, if not always for the most noble of motives.  Caught up in this is Private LeFleur (Spencer Martin), a Cajun lad with a sense of the mystical and paranormal the other two soldiers lack (that the three comprise examples of Upper, Middle, and Lower classes is just a nice touch--both actors and writer do not make much of this fact, just letting it speak for itself).

Geir Styrssen (John P. Cannelly) is this tiny island's Minister, as well as an amateur meteorologist who feels baffled by the current storm, which seems centered on the island itself, specifically the abandoned church where the GIs have taken shelter.  The Lieutenant, obeying strict protocols, will not abandon his "base camp" but insists they need to stay there while fixing the radio and the gun.  Yet the Minsiter and his daughter Vigdis (Una Eggerts) do what they can to make the three men comfortable.  This includes food and some powerful spirits to drink, which proves a perhaps unfortunate ingredient to the brew of events.

The power of the piece lies in the reality of it.  Not physical--afterall, while the uniforms look period, they remain quite dry and even the set is far more suggestive than anything remotely naturalistic.  It lies in the emotional reality.  We believe each of these five characters as real people.  Even when they seem to be at least leaning in the direction of a stereotype, acting and writing do not in fact go there.

Which means the spiral of disaster feels both inevitable yet full of surprises.  Neither we nor the characters ever know everything.  Just like life.  Freak storms do happen, and whether anything paranormal might be involved remains a question.  Battered radios fixed piecemeal work erratically, and may pick up some odd, distorted signals.  If some of them sound as if a message from...someone or something not of this world...that happens.  Truth, as often seems the case, remains a question.

Defenders plays Saturdays and Mondays at 8pm, and Sundays at 3pm until December 8, 2019 at the Black Box Broadwater Theatre 6320 Santa Monica Blvd, (at Lillian), Hollywood CA 90038.

I loved this play and your review captures the spirit perfectly, David. I think it's Cailin Harrison's finest piece of writing to date. Wonderfully directed and convincingly acted by all 5 superb actors. Brava to one and all!