Romeo and Juliet in Hell (review) 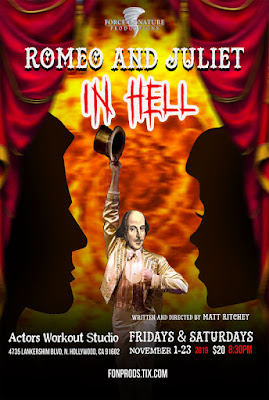 With a title like Romeo and Juliet in Hell, one expects comedy.  If any doubt remained, all one has to do is glance at the poster.  Serious drama?  No.  Existential drama sipped in surrealism?  Well...no.  Maybe!  But, not.

But what follows in this show written and directed by Matt Richey proves far more clever than one might have guessed.  A delightful surprise that, not least with the very start when the title characters wake up after death in some place they don't recognize.  Seeing each other, Romeo (Colton Butcher) and his beloved Juliet (Lauren Diaz) immediate go into an embrace/make out session so fierce neither once notices the dagger sticking out of the latter's chest!

In fact it takes a bit for them to calm down and wonder what's going on.

Enter Tybalt (Carlos Chavez) and Mercutio (Nick Ley) to greet the pair.  No hard feelings as it turns out, but they are here to give our title lovebirds the lowdown.  This is, indeed, Hell.  And their personal Hell involves Tony (J. Elijah Cho) from West Side Story singing "I Just Met a Girl Named Maria"...forever.  They don't understand--which makes sense.  Cackling, the other two characters from Romeo and Juliet inform them of the truth.  They are all imaginary characters, sent into the Pit of Fire solely because they didn't survive the story in which they appear.

Okay, that is simply a delightful and weird premise, which is then milked for every laugh, as our two heroes seek to find a way to navigate out of their personal Hell into...well, somewhere else.  Anywhere else.  Along the way we meet plenty of other Shakespearean characters, generally coping as best they can (which sometimes means very poorly) with their situations.  King Lear (Ron Gabaldon) remains insane, as does Lady Macbeth (Therese Olsen), while her husband (Graydon Schlichter) just tries to cope, having bonded a little bit with Othello (Brenton Sullivan), while everyone male pretty much lusts after Desdemona (Chloe Zubiri).

Did I mention the Devil is Bob Fosse?  Yeah.  The Devil is Bob Fosse (Kawika Aguilar).  Rounding out the cast is Hamlet (Mikael Mattson) and Laertes (David Chernyavsky) along with a Violin (Jennifer Novak Chun) who leads us into the Infernal Regions.  All of which combines in what amounts to that relatively rare thing--a genuinely funny farce.  Most are nothing more than a string of jokes and pun strung together but this one hangs its humor upon plot and character--focusing most clearly on the teenagers at the heart of the story.  Teenagers, as in "inexperienced but honest" hence gullible and overreacting but genuinely feeling strong things.  In the hands of a good cast--as this is--the comedy holds together and remains with us as we leave the theatre.