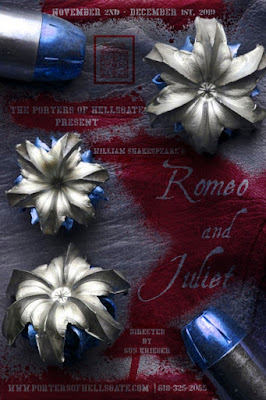 Shakespeare's second tragedy remains one of his most-produced, so small wonder Porters of Hellsgate would get around to it sooner or later (even without their avowed goal of doing the entire canon).

Under the direction of Gus Kreiger, this specific Romeo and Juliet focuses on the pointless but pervasive conflict between the families.  Along the way, we are treated to some amazing sword fights on stage--thanks in so small part to fight choreographer Jesse James Thomas.  Really, so many sword fights on stage don't look good at all, but this one clearly shows the cast rehearsed those scenes exhaustively and kept up their practice.  Kudos!  I literally felt myself at the edge of my seat at times!

So that tells you right off this production is exciting!  More, and this could use lots of emphasis, the leads and several key characters end up emerging from some very fine performances.  We believe Romeo (Will Block) and Juliet (Rachel Seiforth) are not only in love, but we believe their full context of their characters' lives.  For the latter we get a vivid sense of the Capulet household, from her onery father (Ted Barton), chilly but obedient mother (Jordann Zbyliski), the latter's hot-headed nephew Tybalt (Evan Lipkin), and finally the kindly but ultimately subservient Nurse (Thomas Bigley--the second time I've seen a man cast in the role, which works very well indeed).  Romeo of course is more defined by his friends, especially the wild and dangerous Mercutio (Dana DeRuyck) and the much more level-headed Benvolio (Amanda Noriko Newman--who also functions as Fight Captain).  These last two give a pair of the best performances in the whole show, vital if we are to understand why other characters around them react as they do.

The whole show ends up very fast-paced, which brings it in at just about two hours.  Among other things the design itself proves clever and extremely practical--clusters of red and blue roses, mirroring the red and blue costume scheme dividing up the cast between Capulet and Montague.  Meanwhile, swords and weapons literally hang all over the set, just waiting to be used.  And they are, of course.  This play has less of a body count than some (Hamlet, King Lear, Richard III for example) but we get to know every single corpse before they die.  Know and not wish their deaths, even the relativeyl oafish Paris (Michael Bigley).  We share the reaction as each living human being is snuffed out, gone forever.

All of which means this makes for a production that works, no small thing!  We feel engaged, even fascinated by the situation and nearly all the characters.  The plot ends up straightforward, amid the emotional roller coaster the characters endure.  Its focus extends to all kinds of nice details, even the reading of almost throwaway lines.  Coupled with the integrated scenic and costume designs by Drina Durazo and Jessica Pasternak respectively, the story and the drama flows smoothly to sweep us along.

Romeo and Juliet plays Fridays and Saturdays at 8pm, Sundays at 2pm until December 1, 2019 at the Whitmore-Lindley Theatre Center, 11006 W. Magnolia (east of Lankershim), North Hollywood CA 91601.
Posted by Zahir Blue at 9:23 AM