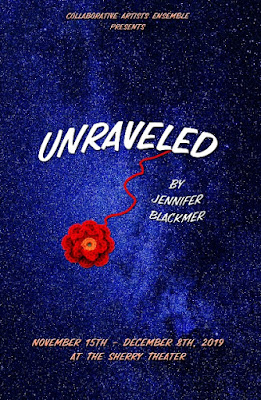 This marks the fourth play production I've reviewed from the Collaborative Artists Ensemble.  I can honestly say each one has proven enjoyable, sometimes even powerful.  Unraveled by Jennifer Blackmer makes for something of a return to themes, in that it mirror's last years' Anatomy of a Hug in tracing a young woman's journey to letting go of the mother, with all complex emotional landscape that involves traversing.

Joy (Meg Wallace), the lead character, is a single professor of physics and philosophy whose intellectualism seems of very little use in dealing with her mother's dementia.  She hires a hospice nurse named Anna (Heidi Shon) but tries fiercely to keep her professional and personal lives distinct, even segregated.  This even dovetails into a personal relationship she's developed with a graduate student.  As if to emphasize the issues with which she's dealing, Joy interacts with two different actors portraying her mother.  Carolyn Crotty plays her as Joy remembers her, a vivacious and beautiful woman full of spit and vinegar.  Kathy Bell Denton has the (frankly) more fun job of  the dying version, the half mad but determined and extremely confused remnant of what was once there.

This rather sounds, does it not, like what used to be called a "Movie of the Week" or a "Lifetime Movie"?  Well, there is some justice in that.  To take what feels or at least looks like very melodramatic fare and elevate it to drama takes a great deal of concentration on pretty much every level.  For this reason doing larger than life characters, even insane ones, in many ways are easier for talented actors.  Unraveled seems to have those challenges in spades. 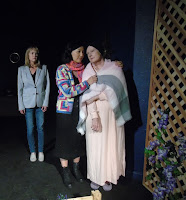 As a result, the whole production feels more spotty, less consistent.  Flashes of moments, often good ones, end up sprinkled amid perfectly workmanlike blocking and reasonable line readings.  The women in the cast seem to get all the good scenes and lines, but (and this seems on par with the subject matter) a lot of those are on the nose.

So I walked away, thinking I'd seen better from this company (which involve several of the same actors).  Honsetly, I cannot say it was anywhere near bad.  Nor can I call it mediocre.  But it rarely excited me.