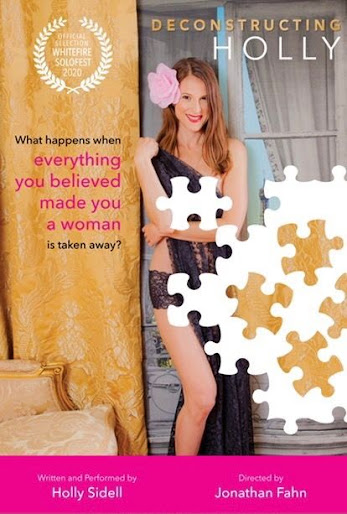 Deconstructing Holly, represents one of an explosion of really well-crafted, well-performed solo shows over the last couple of years in Los Angeles live theatre.  It nicely combines both focus and genuine drama in ways worthy of praise.

I'm going to start with one criticism, which is pretty much the only one on offer.  Just to get it out of the way.  The entire ebb and flow of the writing remains very much "on the nose."  Each revelation this character goes through (a refreshing if a bit daunting multitude) is faced in the abstract, we are given a tiny speech, and voila Holly has learned her lesson.  Frankly, this does not seem very human to me.  It feels more like a cliffnotes version of her growing up with both gender and body issues, rather any kind of a journey.  A lot of issues were brought up, then dropped, or glossed over.

Having said that, What is right in this show works extraordinarily well.  Me, I'm a man, so I tend to face a different (sometimes related) set of issues and expectations, yet without a doubt the feelings Holly go through resonated.  An entertaining delivery coupled with genuine heart, genuine pain, accomplishes much.  It certainly did here.  Our one character we follow began life with false expectations, a low sense of self worth, and a definition of self too shallow to work for long.  Escaping from all that in an effort to find Love and become a Mother has within it several paradoxes Holly explores in ways which ultimately hurt.  Her pain is one we recognize.  I could feel it from the audience, but also in myself quite vividly.

Probably the strongest part was when she all-but-screamed, Job-like, at the unfairness of it all.  She had spent years reshaping herself into a better person, a wiser person, a stronger one--yet in the end her "reward" was to be alone, betrayed, her body surgically altered into something that no longer feels like her, rendering her infertile as well as even more self-conscious about her appearance!  It is WRONG.  It is UNFAIR.  It should NOT happen!

But it did.  And facing that, then going forward, takes a lot.  Holly honored us by sharing the power and (yes) the glory of that effort.

Deconstructing Holly plays at  the Broadwater Black Box, 6322 Santa Monica Blvd, on Saturday, August 21 at 5:30pm as well as Friday, August 27 at 8pm.