Experiencing Love on the Spectrum 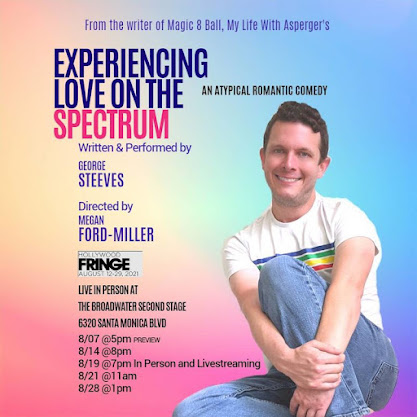 Experiening Love on the Spectrum, written and performed by George Steeves, is an intimate and very personal tale, full of humor and winning wisdom the hard way, via experience.

Steeves is gay and has been diagnosed with Asperger's Syndrome, also known (sometimes) as high functioning autism.  He recounts, with an almost startling amount of good humor and wit his romantic history up to the present (or at least up until the writing of this piece).

Along the way, we eventually get an image of a lonely person, growing up with very few friends, struggling with an identity that only seems crystal clear to the very few (and they usually end up mistaken).  One of the most poignant moments, for example, is Steeves recounting how in Middle and High School his classmates pretty much assumed he was gay.  Yet he refused to even consider that might be true, because he didn't want them to be "right about me."

In a good way.  In a way that makes me feel very much one with this young man I hardly know.  Makes me feel one with almost everyone really.  This was a sad little vibration in a life that feels at least in tune with myself.  And others.

Yet again, it bears repeating--this was lovely.  It was funny.  I smiled and laughed a lot watching this show, and felt some quite strong flashes of deja vu along the way.