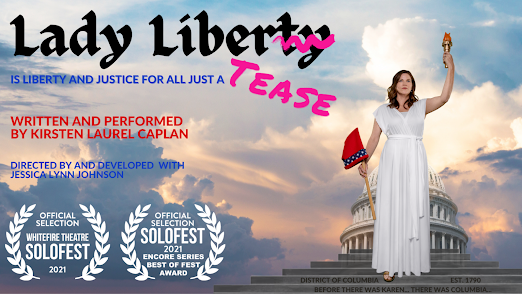 Just mentioning--so far I've only seen solo shows in this year's Fringe.  Not complaining but the next show is a full cast.

Meanwhile, Lady LiberTease is about the personal fallout of Trumpelstilskin's election to a California drama teacher who is also a wife and mother--one who felt (as so many did) profound shock not only that this man (of all people) was elected President, but that the Republican Party swept the into control of both houses of Congress.  She had been desperately hoping in November 2016 to see the first woman President of the United States, that (as she put it) her ceiling would be her children's floor.

In her emotional tumult, she accidentally summons Columbia, the little remembered "Goddess of Liberty" invented by the Founding Fathers to serve as an icon of unity.  Columbia is the statue of freedom atop the Capitol Dome in Washington DC, as well as the model of the Statue of Liberty, and in fact is the source of the name of the District of Columbia.  So begins a journey into the history of the United States, with all the hopes one might imagine, but (more importantly) the broken (or at least unfulfilled) promises.

More importantly, this is Kirsten's deeply uncomfortable journey through an even more troubling set of truths--exactly what she can do about all this, and how that involves recognizing when she (however innocently) contributes to it.

This show has a lot of passion and theatricality, with more than a few dashes of mythology which is absolutely my jam.

But to be honest it feels more like a very entertaining lecture than a tale of personal revelation, which is clearly what it is intended to be.  Which by no stretch makes this solo show bad, only less than it could be.  It pulls its dramatic punch, so the punch lands with less impact than I think was intended.