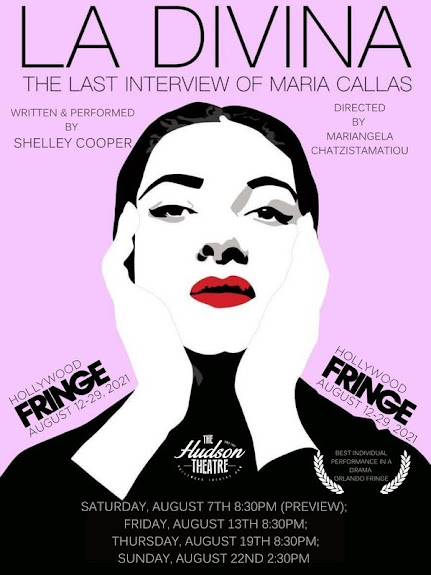 Not being a big fan of opera (although far from hating or avoiding it) methinks I missed some nuance in this solo show La Divina, But, I'm not at all sure I'm missing that much.

Shelley Cooper wrote and performed this piece, an hour long interview with Maria Callas, the great opera star who became perhaps most famous for her relationship with shipping tycoon Aristotle Onassis.

Who we meet in this interview is someone genuinely tormented, but who refuses to dwell on it, focuses instead on her work.  In perhaps the most poignant line in the whole play she says "When I sing, that is the only time I feel loved."  Fortunately we get to hear (and, importantly, see)  Cooper sing, during which she feels that love and it does indeed transform her.  The rigid, elegant, controlled person in the interview becomes a rapturous artist in song.  Honestly, having no Italian and very little French, I hardly understood a word she said.  But there was no need.  I could tell she understood every word, and meant them down to her core.

This was indeed exactly what Callas meant when discussing earlier how singing and acting must be combined.

As the interview strayed into more personal territory, we also increasingly understand this mask she wears when not performing--an almost icy demeanor, a perfectionist who believes (or at least claims) this is just devotion to her art.  It clearly is that, but equally it seems the habit of a child with no power over her life, with an unloving but controlling mother, surviving the Axis occupation of Greece, then later falling in love with a man who was if anything just as controlling as her mother.  Her mask is scar tissue, and her singing freedom as well as love in a lonely life, made perhaps more so by her refusal to feel self pity.  Or, not.