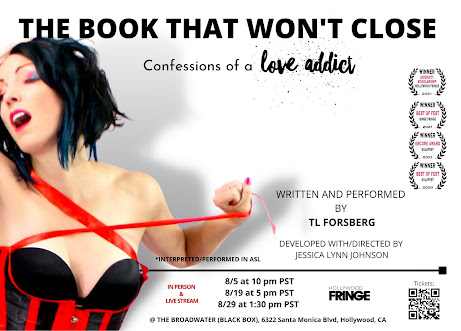 Some plays/performances make me laugh, others make me think, a few stun with technical skill and passion, some do indeed make me weep.

The Book That Won't Close does all of the above and more.

TL Forsberg's solo show about her love addiction lays bare a lot of often painful truths.  Others, to be fair, run the gamut to hilarious and back (the business with her ASL interpreter is groundbreaking and was worthy of applause in its own right).  But when someone in deep pain reveals that, then explores the reasons why--and there are so very many reasons--expect some tears.  Forsberg's story peels back a deep sense of confused identity (she is, like most who identify as Deaf, hard of hearing--a fact that which renders her a target for all kinds of small and not-so-small abuse from nearly every direction), as well as a generational tradition of women loathing themselves.  An alcoholic father naturally did not help, nor a mother who refused to speak about  her daughter's disability.  This brief synopsis does little to convey the depth and spectrum of what Forsberg gives us.

In the end I was awestruck.  Not least because of the power and skill of the show, but the rawness of what Fosberg shared.  She even introduces us to some of the voices we all have in our soul, in her case this includes an analyst and a nightmare version of her child self.  As we met all these characters, including her various past boyfriends and a few others, the more I did more than simply empathize with this person on stage bleeding her soul for all to see and (ironically) hear, I recognized her.

That is when I wept.  And I wept again as we emerged into who she has become today.  Not perfect, but healed to some degree, and healing still to some degree.  Also, accepting herself as who she is, including the sharp corners and rough patches.