Some more of my favorite fictional characters, this time from "normal" (whatever that means) television... 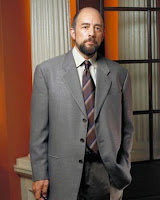 Toby Ziegler from The West Wing. One of the things about this show was that it showed a presidential administration that was just barely possible, and was probably as good as one could conceivably ask for. Among the most interesting (and there were many) characters was the White House Communications Director. Why was he my fave? Partially because I felt a kinship. Like him, I've got this big IQ and am frankly unused to the company of those with one in the same range. He has a lot of failure behind him, but keeps on going anyway and doesn't give up his principles. One incident that showed this man's soul was when the police asked him about a dead homeless man who had Toby's card in his pocket (turned out the guy had a coat Toby denoted to Goodwill). Toby took it upon himself to arrange for this man's funeral with full military honors (he was a veteran), wielding his clout as a member of the Oval Office. When the president asked him "What if every homeless veteran started showing up and asking for help from the White House?" his answer showed every single quality I adored about him: "We can only hope." 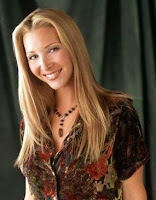 Phoebe Buffay from Friends. One of the best sitcoms ever. And Phoebe just might be the strangest character ever to grace a t.v. screen. It made perfect sense to me that some borderline schizo homeless woman called her "Strange Girl." Mind you, she is pretty odd by any standard. Her idea of music is too bizarre for words, she has ambitions like flying a plane (as in simply grabbing one from the airport), etc. But what really makes her so "out there" is probably the fact she is comfortable with herself, having lost along the way any neurotic need for consistency, while at the same time retaining a hard core of (pretty neat) values. And when you think that might be simply the result of (very unusual) upbringing, consider the person her twin sister turned out to be (who started making porn movies under Phoebe's name).

Dexter from Dexter. Okay, anyone not expecting to see this guy on this list doesn't know me very well. Can we say "Paradox"? Dexter Morgan is a serial killer, a man who feels the need to kill other human beings. But--and here's the crux--he wishes he didn't feel that need. Adopted as a child by a cop who eventually recognized what his beloved son was, Dexter spent his childhood with a man who indoctrinated him with a code. First and foremost: Only kill murderers. And he recognizes this about himself, even telling one of his victims "I know I'm a monster" and calling them "What I would have been without my father's code." Dexter is a psychopath who dreams of being something else, a unique serial killer who doesn't feel very much and is startled by what he does. One of my favorite moments was when he had a serial rapist/murderer ready to die, and the guy tried to talk his way out of it, in the process saying something about Dexter's girlfriend. Dexter instantly drove a knife into his heart with the words "Don't talk that way about my girlfriend." Then, the totally puzzled look on his face, contemplating his own actions... Wow. 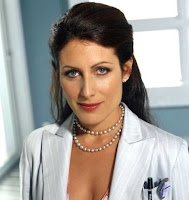 Dr. Lisa Cutty on House. I can never quite decide if Cutty is supposed to be Inspector Lestrade or Irene Adler on this show. Don't get me wrong, I really love the entire cast, but Cutty is one that always gets under my skin most. Maybe because she's got what amounts to the toughest job imaginable -- riding shotgun on the obnoxious, ruthless genius who is the title character. And no, it isn't simply because Lisa Edelstein is drop-dead gorgeous. She is, but that is beside the point. The world is full of beautiful women, especially TV-land. But her courage and strength are extraordinary, and by that I mean the specific way she has to handle this godawful situation. That she actually cares about House as a person frankly is more impressive, and probably makes her job even harder in some ways. After all, isn't it true that those about whom you care have the most power to wound? 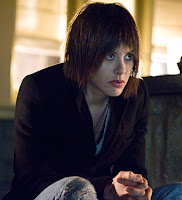 Shane on The L Word. Plenty and legitimate are the complaints about this show, and I agree with a solid chunk of them. But I bow to few if anyone in my admiration of the central characters. My favorite (barely--Alice, Bette and Jenny almost edged her out) is Shane, the womanizing hair stylist who practically drips noir sensibility and edgy charm. By all accounts, this person should be a bitch. Look at the details of her life, the way messes things up and hurts many of those about whom she most cares! And yet--rarely does she act out of spite. Her heart is not only gold but platinum. Maybe moon rock. Much of her behavior is clearly a reaction to the habit of being in pain, and yet despite herself she keeps allowing herself to be vulnerable. And when things are really important, she does her damnest to be kind and to help. The person she is trying to become is the one we all should strive for. In the first season, when she showed compassion for the girl was stalking her--that is what hooked me on Shane.

As per usual, I'm limiting myself to five and not worrying about whether these are the ultimate five. They'll do. They're my faves for right now, and among my faves forever.
Posted by Zahir Blue at 3:03 PM

I identify with Toby. Along with what you said, he also has a sort of dark place in him, alienated, disappointed by life, himself, and everything, almost to the point of complete despair (but holding that in and managing it between clenched teeth...), yet totally driven by the almost unimaginable (sometimes) possibility that life can be fixed. The result is an idealistic doomsayer.

This is Magnus Trask from DS Forums by the way.

"Friends", not my kind of comedy, but the one thing I like about it is Lisa Kudrow. I also like your summing up of the character and what she "means".