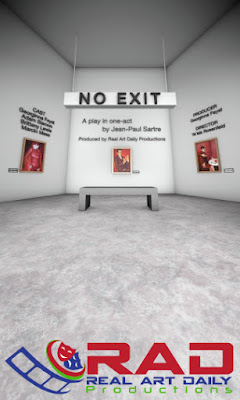 Jean-Paul Satre wrote his play No Exit in France during the Nazi Occupation.  Given that fact, and its subject matter--three people entering Hell after their deaths--one might expect something excessively grim.

Interestingly, we don't quite get that in the current production by Real Art Daily Productions.  Rather the production feels more like a dark comedy, albeit not a farce, not at all.  Indeed, a lot of the humor remains low key, as if building upon all sorts of tiny "in jokes" as well as the cumulative repertoire of comedy--the irritating habit, the asking of stupid questions, the almost amazing pettiness in the face of dreadfully serious matters (coupled with the realization nothing really matters anyway).

Vincent Cradeau (Adam Slemon) is let into a room he does not like by a Bellboy (Marcin Mesa).  He seems surprised by the decor, displeased at the style, but on the other hand does expect thumbscrews. Upon learning there are none, he expresses surprise then tries to demand his toothbrush--even as the Bellboy points out he won't need it.  Soon enough he finds himself joined by Inez Serrano (Georginna Feyst).  The two immediately dislike one another.  Finally Estelle Delaunay (Brittany Lewis) comes in, at first mistaking Cradeau for someone else. 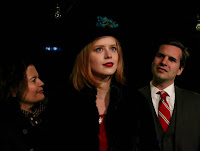 The door shuts, with no way to open it.  Three pieces of furniture await, places to sit.  All three expect torture.  Inez figures out the plan--each is to be torture to one another.

Again, this sounds grim!  Yet what we get (at first) proves a kind of domestic mystery.  Why have each of these individuals come to Hell?  They must know, since all three know where they are.  Their means of death--being shot, gas, pneumonia--give barely any hint. They try to ignore one another.  It does not work, even as they resolve to avoid the torture by simply refusing to interact.  Estelle, however, tries to do her makeup and finds no mirror, not even in her purse. A sign of things to come, just as Cradeau reacted in disturbed fear at never ever getting to sleep.  Inez?  She watches, and waits.

The mystery does prove compelling--although frankly if the actors lacked the requisite ability this play would easily descend into boredom and cliche.  This script demands skill and stage presence, as well as a director on the watch to keep things interesting yet focused.  Once I looked at the program, learning the director Ye'la Rosenfeld had directed The Physicists at last year's Hollywood Fringe Festival, I felt encouraged even before the play began. Likewise the weird German Expressionist set, its distorted perspective focused on the back wall, very much helped create the atmosphere needed.  So too the three perfect paintings by Otto Dix upon the wall (look him up).  Kudos to designer Natalia Bortolotti.

As the trio's crimes eventually come to light, the play shifts to how these three live with themselves, plus what sort of individuals they must be to have committed the acts they did.  More, how do they see one another and themselves.  To what do now-immortal and ageless beings in a room together, having no longer any physical needs--to what do these being cling?  Without society, without any trace of their previous contexts, how can they function?

Well, they seek to recreate the society and context they knew before.  Class divisions rear their heads. Lifelong habits re-emerge. Competition fueled by malice.  Pleasure sought to avoid emptiness.  Excuses giving purpose and definition.  At all costs.  At any price. 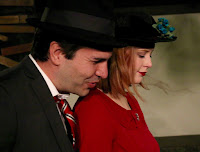 One feels a little drained after a play like this, not least because we feel the growing desperation of these three people stripped of everything save themselves and each other.  The implications, however, they haunt.  Something Cradeau, Inez and Estelle all lack is a core, something authentic and real, an anchor of identity.  Lacking this, they also lack any real moral courage.  Over and over again they proclaim themselves without regrets.  What kind of life is that?

At one point in the play, the door opens and just remains that way for several minutes.  None of them leave.  Why may be the most provocative mystery in the play. At least one of them claims a reason, which while probably accurate to some extent, is not enough.

So we must contemplate, come up with answers of our own.