Damn I am two whole days behind!!!

Here are my choices for the ten very best productions I have seen in the Los Angeles theatre scene in the last year.  Usually a do a dozen, but with directing two plays this year (Richard III as well as Masoch and DeSade) I saw fewer plays than usual.   In no particular order at all:

Nude/Naked by Paul Zoan Hedler, a wildly edgy and supremely well-directed/acted play about a photographer and his complex relationship with the model who is both his muse and daughter.  Even the title becomes a part of the story, as we are drawn into the salacious and scandalous interpretation, even when confronted by what proves very different indeed, if no less disturbing.

Two Trains Running by August Wilson, part of an ongoing project to produce all of the great playwright's "Century Cycle."  This spectacular production, full of nuanced performances, somehow in this odd little corner of Pittsburgh captures the tensions of that specific era in our history.

Orangutan by Troy Deutch was a one woman show in this last year's Fringe Festival, one of the first I scheduled despite the fact I found the premise baffling.  Something about Bill Mahr's joke about Trump proving he wasn't the offspring of an orangutan?  What I got was a fascinating nightmare brought life on stage, and which impacted me in ways that echo in my nervous system to this very minute.

Eurydice by Sarah Ruhl is a retelling of the Orpheus legend from the pov not of the great musician but his wife, her time spent in land of the dead--which in turn becomes a meditation on death and life, on love and mistakes and loyalty plus the blessed virtues of forgetfulness.  CityGarage rarely if ever disappoints, and in fact I had a hard time choosing only one of their productions (for the third year in a row). 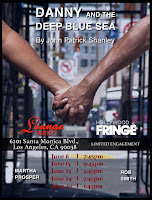 Danny and the Deep Blue Sea by John Patrick Shanley was produced twice for this year's Fringe Festival.  The one I saw grabbed my attention and imagination, never letting go with is powerful series of scenes between two wounded, hurt, lonely people--and finally, using enormous courage, accepting the possibility that hope might not be in vain.  A more powerful and haunting tale is difficult to imagine. 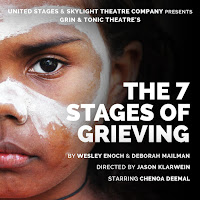 The 7 Stages of Grieving was and is a collaborative work, a one woman show (I saw a lot of fantastic examples of this semi-genre) shown at the Skylight Theatre in Los Feliz, tracking through one person's life and memories the history of the Aborigines of Australia--the ongoing devastation, the ongoing efforts to heal, the ongoing efforts to earn forgiveness.  In my opinion, we Americans especially may need to see this show many times all over the nation.

Deer Woman by my friend Megan Therese Rippey, who also performed in this one woman show presented at the Son of Semele (there's a remounting coming up at the Whitefire).  In this show, Rippey introduces us to a figure from her dreams, a powerful deity/avatar of her personal mythology.  Again, I had a hard time choosing between this and something else from Son of Semele, but I have my rule.

Last Swallows by my friend Cailin Maureen Harrison (this sounds like an odd kind of nepotism, but I really do know a lot of talented people) proves a wonderful family portrait that seems almost too huge for a tiny stage and mere couple of hours of time.  The scope of humanity shown in this fistful of characters moved me profoundly, and in close to every single way.

The Last Croissant by Veronica Tjioe, produced by the Attic Collective, gave me absolutely delightful insight into life and love and the quirky nature of my own species for every single moment of its runtime.  Set amid a camping trip, the play proves a combination of whimsy, farce, drama, and forgiveness with lots of gender sleight-of-hand alongside what I have to call "magic." 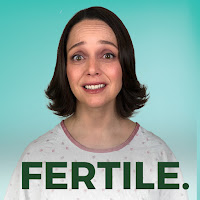 Fertile, yet another one woman show written and performed by a friend of mine--Heather Dowling, whose show can be seen one more time here in LA on January 29!  In this case, she offers us the fictionalized odyssey of her attempts to become a mother--in the process introducing us to what seems like dozens of characters, each vivid and informing her heart-felt tale.  An intimate tour-de-force of humanity, dreams, frustration and maybe a little bit of real, practical wisdom.